Figure this – you are in the process of buying a commercial real property and you see service vehicles (such as FedEx, UPS, and other companies) from the neighboring business crossing over the property to access their business, and some of the other property employees parking in the soon-to-be your parking spaces. What do you do? Ask the owner of the neighboring property about it? That is what the disappointed buyer in today’s post. Your Sacramento real estate lawyer might advise you to get representations from your Seller, as a condition to your contract. Also, some title insurance policies will cover prescriptive rights, but our buyer just brought it up with his future neighbor eight months before escrow closed. He told him that he did not want their vehicles crossing the property line. The neighbor replied ‘no problem. We’ll take care of it.’ But they did not take care of it -in fact, the neighbor already believed that he had a prescriptive easement. The sale closed escrow, the trespass continued, and the buyer sued the trespassing neighbor. 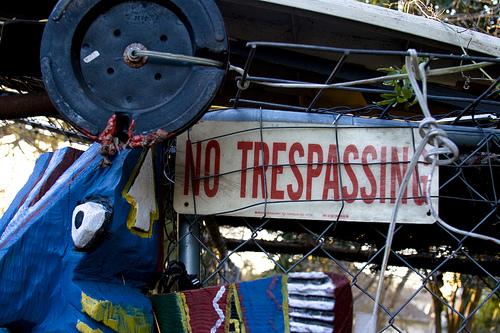 In Steven Hoffman v. 162 North Wolfe LLC, The buyer, who was a commercial real estate broker, sued the Sunnyvale neighbor, claiming that the neighbor defrauded them by falsely advising that they had no claims or interest with respect to the property. (Here’s the google street view of the two properties) The Hoffmans alleged two fraud claims–concealment/suppression of facts, and intentional misrepresentation. After the conversation discussed above, the buyer did not bring the matter up with his seller, nor did he again discuss it with the neighbor. He claims that he thought it was taken care of.

concealment/suppression of facts- No legal relationship

The court first noted the necessary elements of a concealment/suppression claim consist of “‘(1) misrepresentation (false representation, concealment, or nondisclosure); (2) knowledge of falsity (scienter); (3) intent to defraud (i.e., to induce reliance); (4) justifiable reliance; and (5) resulting damage. The defendant argued that it had no relationship with the buyer, thus did not have any duty to disclose their prescriptive rights. The court agreed, stating that the person charged with concealment or nondisclosure of facts must be under a legal duty to disclose them. Such a duty to disclose can arise from the relationship between doctor and patient, employer and prospective employee, seller and buyer, or parties entering into any kind of contractual agreement. But none of those situations existed here- they had no relationship, and thus no legal duty to disclose a claim to prescriptive rights. The plaintiff argued that, when a party does make a representation, he has an obligation to speak honestly and not make misleading statements. However, in this case, the neighbor was NOT asked if they claimed an interest in the neighboring property, and the statement that “we’ll take care of it” cannot be reasonably construed as speaking about their claimed interest in the property.

Concealment/suppression of facts- No Justifiable Reliance

The plaintiff must also show that they actually relied on the misrepresentation or concealment, and that such reliance was reasonable. But after the conversation with the defendant, the plaintiff here continued to see, continuing for eight months, vehicles from the other property crossing the property the plaintiff was buying.

Intention Misrepresentation
The plaintiff claimed that the statement “We’ll take care of it”, was an intentional misrepresentation.” But the court concluded that this was “too vague to be enforced.” And, even if it was considered a misrepresentation, again there was no justifiable reliance.