California equitable easements are created by courts when, balancing the conveniences of the parties and considering the relative hardships between them, the court refuses to prohibit a nuisance or encroachment. This is the same result, though a slightly different analysis, that an implied easement. Anyone faced with a problem use, where it appears necessary for one party but unwelcome by the other, should consult with an experienced Sacramento and Placer real estate attorney. In a recent decision, a plaintiff bought property knowing that there was a road across it used to access other parcels. There was no recorded easement, so he sued to stop the use. The defendants countered to quiet title to an easement. The court said stop complaining. 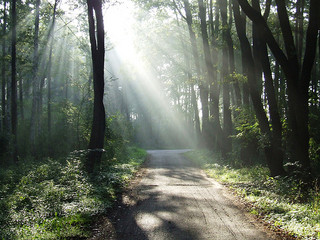 In Linthicum v. Butterfield, the plaintiff bought parcel One in what was originally National Forest land. Prior to that, the Forest Service granted a special use permit to the owner of parcels two through ten to build an access road across parcel One, which was still owned by the Feds. Through a number of transactions, other people eventually owed Two through Ten, the Feds sold One, and the Plaintiff ended up with One. The Special Use Permit had not been transferred to the new owners of Two through Ten, but the Forest Service considered it still valid, though needing to be transferred. Owners of Two through Ten had used the road for possibly 60 years to access their property.

At trial, testimony about building an alternative route across much steeper land would require a 40 foot high retaining wall and moving 40,000 cubic yards of earth (i.e. very expensive.). The Judge did a site visit, and said the existing road was the only access, and quieted title in the easement. 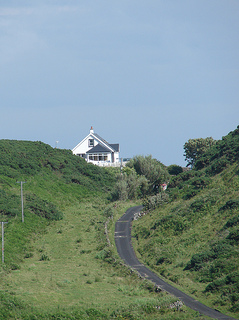 The three factors that the trial court considered in exercising its discretion to deny an injunction were:

2. If plaintiff will suffer irreparable injury by the encroachment, the injunction should be granted regardless of the injury to defendant, except, perhaps, where the rights of the public will be adversely affected.

3. The hardship to defendant by the granting of the injunction must be greatly disproportionate to the hardship caused plaintiff by the continuance of the encroachment and this fact must clearly appear in the evidence and must be proved by the defendant. But where these factors exist, the injunction should be denied, otherwise, the court would lend itself to what practically amounts to extortion.

In doubtful cases should be decided in favor of granting an injunction, but the court had no doubt here. The problem road was the only access. Meanwhile, allowing use of the road would not affect the Plaintiff’s ability to develop his property. The court also found that the Plaintiff caused the dispute, because he bought parcel One with full knowledge of historical use of the properties, and made a concerted effort to deny defendants of the value and use of their property. This decision proved more than ‘buyer beware’- the judge said buyer, don’t be a jerk.