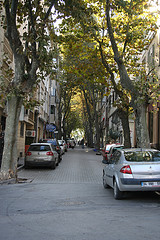 Two pedestrians were stuck by a car while crossing the street in Los Altos. They suffered serious injuries, and in a lawsuit named the city claiming this was a dangerous intersection. The city cross-sued the homeowner, charging that a large tree was a hazard and blocked visibility. The tree was not on the homeowner’s property, but adjacent to it. The owner never trimmed the trees, but PG&E did because there were power lines running through it- PG&E told the owner not to touch it. Now the owner needs to be worried about defending a lawsuit concerning their real property.

The city is claiming that if this was a dangerous intersection, that is due in part because of the tree. They rely on the decision in Gonzales v City of San Jose, which dealt with a person who slipped on a city sidewalk and was injured. The slipper sued the city and the adjacent landowner. San Jose had an ordinance that made the adjacent owner potentially liable to third parties for injuries on a city sidewalk. This placed a duty on the adjacent homeowner to maintain the property, the idea being that the homeowner is in the best position to see the condition of the walk on a day to day basis, and provides an incentive for the owner to maintain the sidewalk in a safe condition.

The situation is different with an adjacent tree. There does not seem to be a similar ordinance that creates liability for adjacent trees. In California, tree liability starts with asking who owns the tree. The location of the trunk determines the owner. If entirely on one person’s land, that person owns the tree, even though roots and branches may cross the boundary. If the trunk is on a boundary, both property owners share ownership of the tree. Civil Code §833 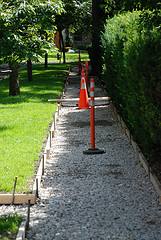 However, liability may expand beyond the boundary line. If the property owner does something that acts like they are claiming ownership of an area, liability may arise. Such occurs sometimes where the owner maintains the adjacent property (eg. mows a city-owned grass strip -many municipalities have ordinances covering this) and fences it in. The courts find the key to be whether the adjoining landowner took action to preclude or limit the actual owner’s control of its own property. Alpert v Villa Romano.

In this case, it does not appear that the homeowner took any efforts to maintain or control the problem tree, nor prevented the city from maintaining it. Concerned owners should contact an experienced Sacramento and El Dorado real estate attorney. A knowledgeable real estate attorney will be able to advise owners about their potential liability concerning trees and about how their insurance might apply to such a situation. In this case the city is hoping the owner has insurance, and insurer will be required to defend the lawsuit. That increases the money available for settlement other than from the city and its insurance company. Spread the blame to spread the cost.