California real estate sellers and buyers are rightly concerned about reassessment of the property on sale. A parcel held for many years is assessed, and taxed, based on the purchase price long ago. Prop 13 provides that, real property generally is taxed based on its value at the time of acquisition, not its current value. A sale today would trigger reassessment and an increase in property tax. A problem can arise with ownership of entities such as LLCs or corporations Generally, the transfer of an ownership interest in an entity such as an LLC or corporation is not a change in ownership of the real property held by that entity. However, if one person or entity acquires more than 50%, it is deemed a change of ownership; if you are facing this problem, you may want to consult a Sacramento real estate attorney. In a recent decision the County assessor claimed that more than 50% changed hands; however, the court, demonstrating the math to determine ownership, showed that the assessor was dead wrong, and at risk of paying over $200,000 in attorney fees.

In Ocean Avenue LLC v. County of Los Angeles (227 Cal App 4th 344), Ocean LLC owned the Fairmont Miramar Hotel in Santa Monica. Ocean entered a contract to sell it, but that contract was terminated. On the same day of the termination they contracted to sell ownership of the LLC to a group of three entities; a Trust, MSD Portfolio, and Hotel Investor LLC. Staff for the County assessor reviewed the ownership interests and determined that no one had more than 50% ownership. Ignoring staff, the Assessor re-assessed the hotel. The owners paid the tax, then filed suit.

California Code provides that there can be reassessment when there is a change of ownership in real property, “[w]hen any corporation, partnership, limited liability company, Massachusetts business trust or similar trust, other legal entity or any person… obtains through multi-tiering, reorganization, or any transfer direct or indirect ownership of more than 50 percent of the total interest in [the limited liability company’s] capital and more than 50 percent of the total interest in [its] profits[.]” (Cal. Code. Regs., tit. 18, § 462.180, subd. (d)(1)(B).) The Assessor claimed that Michael Dell (that may be his name on the computer you are using) controlled more than 50% of the capital invested by the new owners.

1. The County Failed to Do the Math, So the Court Showed Them How –
The Change of Ownership Theory.

The Court pointed out that the Assessor did not do the multiply-through test, so the court did it for the Assessor Dell owns:

No matter what the Assessor says, the numbers do not add up. 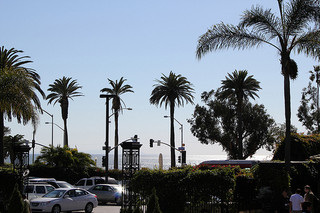 The Assessor next argued that under the initial contract, which was terminated, the hotel changed ownership under the equitable conversion theory, which provides that in unconditional contract for the sale of land, of which specific performance would be decreed, the purchaser is granted equitable title, and equity considers him the owner. However, there is no equitable conversion when the contracting parties demonstrate an intent to the contrary (here, they terminated it), or the contract terms were never satisfied (here, the buyer never paid). Thus, the Assessor losses again.

It is fair to guess that the buyers knew about reassessment, and carefully structured the transaction so that reassessment would not happen. The County Assessor was not so smart, and assumed they would just pay up and go away. It pays to do the math.