California real estate purchase contracts often include mediation provisions. Such a provision provides that, in the event of a dispute, the parties either may, or must, attempt a mediated solution before extended litigation. If the provision requires that they must, there is a penalty for refusing to mediate. In a new decision from Calaveras County a party who thought they were able decline mediation under the provision turned out to be wrong. 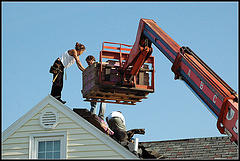 In Cullen v. Corwin, the parties agreement , a standard form purchase agreement, provides for the prevailing party in any dispute to recover legal fees. However, this right is subject to a condition precedent that reads,

“If, for any dispute . . . to which this paragraph applies, any party commences an action without first attempting to resolve the matter through mediation, or refuses to mediate after [the making of] a request . . ., then that party shall not be entitled to recover attorney[] fees . . . .”

Though the court did not say the source of the agreement, this language is in the C.A.R. (California Association of Realtors) purchase agreements. The penalty in the provision is that if you did not obey it, and you win the lawsuit, you are not entitled to get your attorney fees compensated.

The buyers of a vacation home claimed that the sellers failed to disclose problems with the garage roof. They filed the lawsuit first, and then, at the judge’s suggestion, twice demanded mediation from the defendants. The defendants refused, claiming that the plaintiffs had not responded to discovery requests, and that mediation would be more meaningful IF they had those discovery responses. The defendants subsequently got the case thrown out because the statute of limitations had passed, and the court also awarded them their attorney fees of $16,500.

The court ruled against the defendants, finding that they were not entitled to attorney fees. The mediation provision has two parts- first, for the plaintiff, who must make the demand BEFORE filing suit (subject to exceptions). The second part – “or refuses to mediate after [the making of] a request,” does not require the request to be made before the lawsuit starts. In this case neither party could get fees- the plaintiff filed before demanding mediation, and the defendant refused, regardless of when the offer was made.

The goal of the provision is the public policy to promote mediation as an alternative to a lawsuit. Parties in such a dispute should consult with an experienced Sacramento, Yolo, and Calaveras real estate attorney. Presumably, if the lawsuit has gone on for some time, the defendant would have an argument that agreeing to the late demand would not promote this policy. But my experience is that judges promote alternative dispute resolution at ALL times, and any refusal is risky.