Ownership of California real estate is like owning a bundle of sticks, or a bundle of rights. These rights, or sticks, include the right to use, possess, and dispose of the property. Experienced Sacramento real estate lawyers know that some disputes depend on whether you own a stick in the bundle, or something else. A central California party recently learned, too late, that an option to buy was not one of the sticks in the bundle.

The question arose because of a statute of limitations – the deadline a party has to file a lawsuit before their rights are timed out. In Cyr v McGovran, the loser obtained options to buy some parcels of property. The owner later gave options to a lender on the same property that were to be effective only if the loser did not exercise his options in time. The loser’s deadline was December. However, someone screwed up, maybe the broker, because the later options to the lender said the deadline was in September- if the lender acted according to its option, it would exercise it too soon.

The lender recorded a memorandum of option in September, clouding the title. The loser closed escrow on the property in November, and the lender filed suit, recording a lis pendens, which tied up the property for a year before it was dismissed. Then the losers sued the sellers and their brokers for screwing up the dates on the options, claiming damages in hiring attorneys to defend the lender’s lawsuit, and for costs relating to holding on to the property while it was tied up in litigation.

The suit came down to which statutes of limitation applied to the lawsuit claims, and whether they had run out of time. There were two statues they tried to apply.

1. Three year statue of limitations for injury to real property.

This is the statute (CCP §338) the losers wanted, but did not get, because they did not have a stick in the bundle. A lawsuit can claim injury to real property if the defendant wrongfully records a document that places a cloud on the plaintiff’s title. But remember, here it was the lender who recorded the lis pendens, and memo of option, not the defendant owners and brokers. What these defendants really injured was the loser’s option rights to buy the property, which are contract rights, not rights in the real estate bundle. The option holders did not have an interest in the land, so this claim was lost.

The claim against the brokers was that they negligently breached their duty to perform competent professional services- here, to make sure the different options did not have the inconsistent terms that caused this problem. Professional negligence accrues when the plaintiff suffers damages, AND discovers, or should discover, that he has been damaged. Here the harm occurred no later then when the lender filed suit and recorded the lis pendens. Unfortunately, this suit was filed more then 2 years (CCP 339) after the first one, so this suit was dismissed, and the brokers skipped away with a happy result. 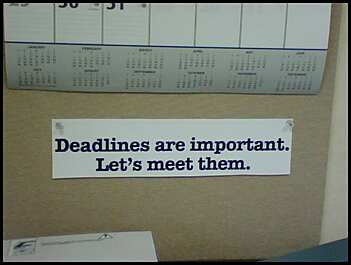 The lawsuit missed the deadline by only 27 days. Real estate litigation attorneys often are presented with a case at the last minute when they do not have time to think through the dispute and statutes of limitation, or they do the thinking and advise the client, who wants to proceed anyway. But worse then that, in this situation, once the lender’s suit was dismissed, depending on the grounds, it may have become a likely party to the subsequent lawsuit, and the three year statute for slander of title could have worked, depending on how the lender’s suit was resolved.