Last week I discussed a cotenancy provision in a California commercial lease, where the court found that the rent abatement aspect – if the specified cotenant was not operating, the tenant’s rent is reduced or eliminated – was found to be an unenforceable penalty. That court also looked at whether the provision was unconscionable, and thus unenforceable. Unconscionability (codified at Civil 1670.5) has no specific legal definition, but generally means extreme unfairness. Business and real estate attorneys often see a situation where one party gets a really bad deal, but that alone does not make it unenforceable. California courts have developed an analysis requiring two elements, “Procedural,” and “Substantive.” In the decision being addressed here, the court found that Procedural element was not fulfilled so the cotenancy provision was not unconscionable. 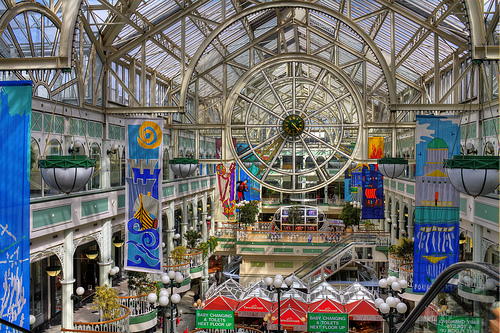 In Grand Prospect Partners, LP, v Ross Dress for Less Inc., Ross entered a lease in a commercial center in Porterville, CA. The lease required that Mervyn’s be open when the Ross store opened, and Mervyn’s was to remain in operation for the term of the Ross lease. If Mervyn’s was not operating, Ross could cease paying rent, and also terminate the lease. Mervyn’s filed for bankruptcy before opening in this center, so the cotenancy requirement was unfulfilled, and Ross declined paying rent. In the ensuing lawsuit, the Landlord claimed that the cotenancy provision was unconscionable, and thus should not be enforced.

The procedural element involves the circumstances of contract formation. It addresses oppression and surprise due to unequal bargaining power that results in little negotiation and no meaningful choice. This can be shown in two ways – either by showing that it is a contract of adhesion, or by the totality of the circumstances surrounding the contract.

The California Supreme Court has defined the term “contract of adhesion” to mean (1) a standardized contract (2) imposed and drafted by the party of superior bargaining strength (3) that provides the subscribing party only the opportunity to adhere to the contract or reject it.

Here, the lease in its entirety was not a preprinted form. There were extensive negotiations, including five versions of the lease. Thus the lease itself did not qualify as one of adhesion.

The landlord argued that the cotenancy requirement requiring a Mervyn’s itself was a clause of adhesion. “Procedural unconscionability focuses on the manner in which the disputed clause is presented to the party in the weaker bargaining position. When the weaker party is presented the clause and told to ‘take it or leave it’ without the opportunity for meaningful negotiation, oppression, and therefore procedural unconscionability, are present.” (Szetala (2002) 97 CalApp 4th 1094, 1100)

The court disagreed in this case. When, as here, when the relatively stronger party insists on including a provision in an otherwise enforceable contract, it does not turn the entire contract into an unenforceable one of adhesion. This differs from the situation where, for example, a clause is added to and existing contract by amendment, on a take it or terminate the contract basis (like a bank giving you the choice to accept the amendment or close your account.)

B. Totality of The Circumstances

In this case, the landlord had 33 years in the real estate industry, was sophisticated real estate manager, and understood cotenancy provisions. Ross did not exert any time pressure; the negotiations went from 2005 through 2008. The landlord was not economically vulnerable, as there was no evidence it was having problems paying its debts nor had a balloon payment coming due. There were no threats. Ross was the larger company and may have greater bargaining power but there were still legitimate negotiations and the landlord had meaningful choices. Ross may have absolutely demanded a cotenancy provision, but the terms of that provision were subject to negotiation. Lastly, the landlord had other prospective tenants to fill the space, and the landlord had actually approached Ross in the first place.
Based on this analysis, the court concluded that there were real negotiations between the parties, and that the landlord was given meaningful choices. The court concluded that there was no procedural unconscionablity here. California law requires establishing both the Procedural & Substantive elements; with one missing, unconscionability was not grounds for invalidating the cotenancy requirement.